As a techie who has been living here since Bubble 1.0, let me take a swing at it. First, a graph: 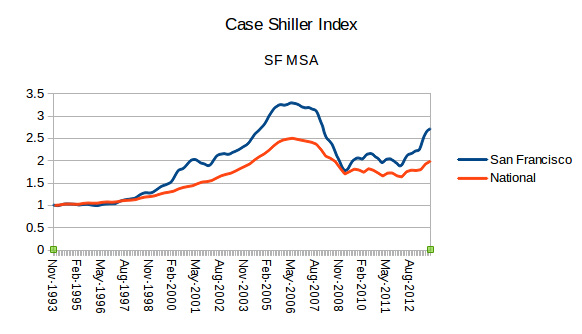 This is housing prices in the San Francisco MSA, a 5-county area, as measured by the Case-Shiller Index. It’s scaled so that Nov 1993 = 1, as that’s when the Mosaic browser was introduced.

Look at it for a bit. When the dot-com bubble got going, area housing prices jumped substantially. By the peak of the housing bubble, they were more than 3x what they were a decade before. With the latest tech boom (or is it another tech bubble?) house prices are skyrocketing again, up 25% in the last year. And that’s for a 5-county area; my impression is that San Francisco itself is substantially worse.

With that as background, let me start with

Item 1: We’re driving the prices up.

The Internet is making a lot of money. That money comes from all over, but a lot of it gets spent here. That’s pushing prices up. Some residential landlords report raising rents by 40% in a year. Commercial rents are soaring as well as companies jostle for more office space. When space costs more, so does everything else. Tech salaries are keeping up, but that’s not true for everybody else.

Item 2: We’re changing the character of the city.

For decades, San Francisco was a haven for all sorts of people: immigrants, beatniks, hippies, artists. It had a rich history of creativity going back at least to Emperor Norton. Many of those people have been driven out by the rising prices. Some to the East Bay, some much further afield. I like tech people just fine, but even I find the suddenness of the shift discomfiting. I sometimes think that it would be nice to go to a cafe and see people doing something, anything other than tech. Imagine how it feels to people not in the industry.

The departures aren’t equally distributed across all classes: the arrival of rich techies is forcing out poor non-techies. Inequality is up substantially; our Gini coefficient has gone from 0.36 in 1990 to 0.51 in 2009, versus 0.43 to 0.47 over the same period for the country as a whole. That means that San Francisco used to be substantially more equal than the US, and now it’s substantially less so. The Mission is a great example of the gentrification; you only have to look at the rash of new, expensive restaurants along Valencia Street to see how quickly it’s changing.

Item 5: Tech is fashionable and powerful.

Just today the Washington Post wrote an article about ThinkGeek and its journey from niche site to mainstream pop culture vendor while selling basically the same stuff. How? Geek culture has become mainstream. In the 1980s nerds needed revenge; today, we run the world. A lot of people would like a tax break for $55 million, but it’s only Twitter that recently got one. If a regular person stops in a bus zone, they get a ticket. But rich Valley tech companies run an entire fleet of fancy private buses, further driving up prices in the city, and nobody says boo. That’s power.

If you aren’t familiar with the technical term “privilege”, start with John Scalzi’s excellent essay: “Straight White Male: The Lowest Difficulty Setting There Is”. The average technology worker is a young, articulate, educated, straight, white male with a fat salary and a promising future. We are not exactly experiencing a ton of adversity. That makes it easy to be clueless about how easy our lives are, and some, like Greg Gopman and Peter Shih amplify that into being total assholes.

Summary: I think their anger is reasonable.

Note that I’m not saying there’s anything wrong with my fellow technology company workers. But I get the point of long-time residents. They didn’t ask to have their rents driven through the roof. They didn’t ask for a lot of fancy restaurants that they never go to. They certainly didn’t ask for large companies in the South Bay to bus in thousands of young millionaires and soon-to-be millionaires. To them it feels like an invasion. And it’s not just locals; even many tech industry people think it has gone too far (see, e.g., “Douchebags Like You Are Ruining San Francisco” or “The Year We Broke Everything“).

Is this uncomfortable? Yes. But I think everybody in the tech industry has to accept that “just living our lives” is screwing up other people’s lives. I don’t know how to solve that problem, but I think the first step is accepting that there is a problem, and that we are the proximate cause of it. However swell we are as individuals, our arrival is creating a lot of negative externalities, and I think we should own that.