NOTICE TO ALL RIDERS: SHOW RESPECT FROM WITHIN!

Can you believe this disgusting corporate disrespect for the citizens of San Francisco?! It’s unfathomable how the City has catered to them at our expense. ABSOLUTELY TOTALLY F-ING OUTRAGEOUS! C’MON PEOPLE–LET’S SAY “ENOUGH!” 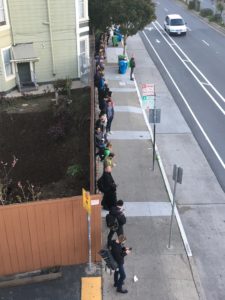 Are you f-ing kidding me?!
This is NOT your private pickup spot–it is OUR FRONT YARD! It is our NEIGHBORHOOD!

We have no one to turn to: City Hall and SFMTA have sold us out. The City has abandoned its citizens. But we WILL win! Sheehy says he has “little control” over it, but goes on and on about how it’s his back yard since he was minus one, and passes the buck to the SFMTA. The SFMTA says they have little control over it, and passes the buck to the state level. However, I’m told this is B.S.: they could undo the Commuter Shuttle Program passed by the Board of Directors and work with the SFPD to ticket. So, let’s change whoever and whatever needs to be changed at the state level then, and force these local reps and entities to either become valuable, or step aside–we don’t need them then if they’re powerless, and catering to corporate greed at our expense. They only make sure no everyday citizen can possibly make head or tail of it, nor negotiate it in any way to affect any change. But WE WILL!

Thus, we believe only appealing to the common sense of the those involved, and their higher-ups, will work. And it will. I can see it in your eyes as you wait out there–ashamed for what you’re doing to our peace of mind and to those around you. Here’s your chance to redeem yourselves…

NOTICE TO ALL RIDERS, AND THEIR OWNERS:

It must be uncomfortable to be such an invasive species.

We KNOW there is no way you can objectively support this type of disrespect for a community.

Join us! Many of you have expressed your support already during our protests. Write your high-uppers and let them know this is NOT alright. Explain that it is not good for your standing in the community, nor for the corporation’s image.

Be the first to simply bow-out of this program, instead advocating for a system of hubs outside our neighborhoods, so that residents may live again. Why should we burden the health risks and inconvenience, for your company’s profits? We don’t want to. Neither would you.

Advocate for hubs outside neighborhoods: Millbrae BART is an excellent option, as it has over a dozen bus bays–it is a BUS TERMINAL–our front yards are NOT. Push for non-fuel sources: electric bikes, bikes, and company incentives to utilize them. Show a little company spirit–ride together as a group, get $xx/month. You can wear your company jerseys, etc. That is, do something regarding bicycling other than clogging the lanes we struggled so hard to secure! You’re young and healthy–there’s no excuse. Seriously–wouldn’t that be a better example? Yea, you’d have to give up the cater-to-me attitude of your luxury gigantor-limos, but you’d express a concern for the neighborhood you’ve invaded, showing instead respect.

BE THE FIRST! DON’T BE SUCH A PAWN–SET AN EXAMPLE! C’MON YOU CAN DO IT–THE WHOLE CITY IS BEHIND YOU! THANKS!